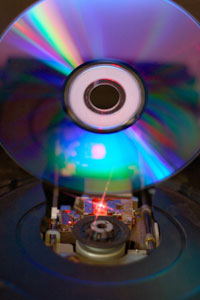 Laser diodes are an ever-increasing part of everyday life. Indeed, when people go through the course of a single day of their lives, they will encounter perhaps hundreds or even thousands of laser diodes. Commonplace examples of the use of laser diodes include CD and DVD drives, barcode scanners, laser pointers, construction alignment devices, and police traffic radar.

Most laser diodes can be easily damaged if their nominal voltage or current parameters are exceeded. In fact, products that contain laser diodes often seem to mysteriously fail, with no apparent provocation. A close examination into the failure modes of these devices has revealed power surges during power-up/power-down sequences and electrostatic discharge (ESD) events as two major causes of laser diode failure.

When power is being turned on or off on a product, internal circuits can be operating outside their intended internal power supply range for a brief period of time. As one example, rail-to-rail operational amplifiers used in laser diode drivers may be specified to operate with power supplies ranging from 2.7 to 5.5 volts. But the manufacturer makes no guarantee or representation regarding what the operational amplifier will do between a supply voltage of 0 and 2.7 volts. Because of this, current or voltage regulation circuits may go out of balance during power-up and power-down, and often apply an over-current or over-voltage condition to the laser diode that is integrated within the product. These over-current or over-voltage conditions may stress the laser diode, such that each power-up or power-down cycle accumulates in the form of device fatigue. Eventually, the laser diode may fail from the fatigue, leading to what the user experiences as a mysterious failure.

Electrostatic discharge (ESD) may also cause mysterious device failures, and there are many ways in which ESD might come in contact with a product. One of the most common ways that ESD is generated occurs when a person walks across a carpeted floor, and then touches something. A discharge can occur to anything being touched, ranging from things that are not sensitive to ESD, such as doorknobs, to things that are very sensitive to ESD, such as electronic products. Studies have shown that, when an ESD discharge occurs, the discharge voltage can range anywhere between 4,000 and up to as much as 32,000 volts DC, depending on environmental conditions, clothing being worn, type of flooring surface, and other factors. When an laser diode that is designed to operate with a terminal voltage of 2.2 volts experiences an ESD discharge of thousands of volts, the result can be immediately destructive. Alternatively (and what happens more commonly), the laser diode will have some latent damage, with dramatically reduced lifetime. Later, when it fails in the field, the user will often blame it on infant mortality or some other cause, not realizing that the actual damage began earlier in the product’s lifetime.