One of the damage mechanisms is optically related, and occurs when the laser diode is producing light (referred to as “lasing”), and the optical energy density exceeds the laser diode’s integral mirrors’ reflective capacity. When this occurs, the mirrored surface permanently loses its reflectivity, and the laser diode no longer functions properly. In layman’s terms, this could be thought of as the laser light becoming so intense that it “vaporizes” the mirror surface.

The second damage mechanism is related to failure of a laser diode’s P-N junction itself. A severe over-current or over-voltage power surge can cause localized heating and other harmful phenomena, which, under extreme conditions, can actually fracture the laser diode die (we have seen this under a microscope, brought on by high levels of ESD).

Both of these damage mechanisms can be provoked by an over-voltage or over-current condition. Low-power laser diodes, that is, laser diodes whose optical output power is below around 200 mW, are particularly sensitive to ESD. This is because they are designed to be inherently fast devices. Indeed, low-power laser diodes are often directly modulated and used for fiber-optic communication with data rates in the gigahertz range. Thus the P-N junction and optical elements of a laser diode can react very quickly to changes in voltage or current.

Therefore, in order to be effective, an ESD protection device and method should preferably be implemented as a proactive measure, by preventing the over-voltage or over-current condition from happening in the first place, not by reacting to it once it has occurred. 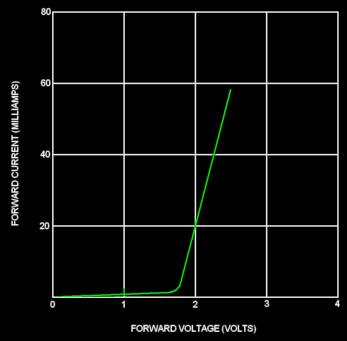 The figure to the right shows the current vs. voltage profile of a typical low-power laser diode. It can be seen that the profile is similar to other types of diodes and semiconductor devices.

Starting from zero volts, applying incremental positive increases in voltage (i.e., those voltages that would tend to forward bias the laser diode), very little current flows until around 1.8 volts is reached.

Once the maximum design current for a particular laser diode is reached (which is around 35 milliamps and 2.4 volts for this laser diode), further increases in current will likely result in failure, caused by one or both of the damage mechanisms described above. Thus it is important to completely prevent voltage, and thus current, from increasing beyond the absolute maximum rating for a particular diode. In most cases, a low-power laser diode will be destroyed if the absolute maximum ratings are exceeded, even for a brief period of time.