A recent high-profile multimedia installation at the iconic Marriott World Center in Orlando, FL, called ‘Light up the Night’ further illustrates how lasers are taking multimedia shows to the next level. This installation broke new ground, as the whole production was sold to the Marriott as a revenue-generating model, which is a bit different from the general notion of selling special FX and multimedia installations, as “entertainment packages”. Mitchell Piper, owner at K-Systems AV, and award winning Creative Designer Gabe Letourneau led the project, showing the Marriott how such an installation could be used to further increase revenues at the property.

Before the project was sold, K-Systems actually setup a demonstration for the Marriott so that they could calculate the real return on investment that would be garnered by proceeding with the concept. And what the Marriott found was that by installing this sort of multimedia setup, they were able to increase client bookings, food and beverage sales, as well as the sale of corporate event packages, by huge margins.

The installation was done at the Marriott World Center’s beautiful resort pool area, which overlooks the hotel property. Lasers serve as the main element in this multimedia setup, and are used to project beautiful beam affects over the pool, bar and lounge area. The lasers are also used to project logos for corporate clients the Marriott hosts, which come for various tradeshows and events taking place at the property.

What made this installation so interesting from a design and technology standpoint, was the use of new laser control and laser projector technology, from industry experts Pangolin Laser Systems, Inc. and KVANT s.r.o.

Since 1986, Pangolin has been the world’s leading provider of laser entertainment technology. The company has received 28 international patents, and products made by Pangolin Systems have also contributed to more than 400 artistic awards for their clients. And for over 20 years, KVANT has been a highly respected manufacturer of laser projectors for entertainment applications. And they readily integrate Pangolin technology into their systems, ensuring that they remain on the cutting-edge of the laser projector market.

In 2015, Pangolin started a new division of the company called the Pangolin Projector Referral Network, which was founded to provide clients with professional quality laser projectors that are the best choice for a given application. Considering that Pangolin developed and pioneered the laser show control and safety technology used for the large majority of laser performances worldwide, they felt there were in a good position to begin assisting clients with the purchase of laser projection systems as well.

Pangolin’s Chief Operating Officer Justin Perry, comments on the start of this new division… “Pangolin is one of the most trusted brands in the laser entertainment industry. And for many years, clients have contacted us asking for information and advise on which laser systems they should use for different shows and applications they have taking place. Considering that we developed much of the laser control technology powering the industry, and that we understand the differences between various laser projectors on the market today – as well as how these lasers fit into the diverse types of shows and projects taking place, we felt we were in a great position to serve the industry as a whole – helping clients obtain professional laser projectors, that are right for their desired application. And with our great relationships in the market, we are able to provide our clients with aggressive price points on these laser projectors, as well as back them up with the first class support and service customers have come to love from Pangolin. Our new division ensures that clients have a seamless experience when integrating lasers into a project or show.”

So for the Marriott World Center multimedia project, K-Systems turned to Pangolin for assistance with all laser related aspects of the show – including the installation of five high power KVANT laser projectors, driven with Pangolin’s new FB4 hardware, and all controlled using Pangolin’s BEYOND software.

From a technical perspective, this installation was quite innovative in nature, as several new laser and multimedia technologies were combined together, to leave the Marriott with a self-running and self-sufficient installation, which in many ways is entirely “maintenance free”.

One of the exciting technologies being utilized at the Marriott installation is Pangolin’s new laser control hardware platform, called FB4. This state-of-the-art laser control hardware is entirely network based, and gets built directly inside of a laser projector, acting as a sort of “media server” for laser shows.

FB4 hardware supports all major show protocols, including DMX, ArtNet, Network, OSC, SMPTE, and ILDA… And will also have support for CITP in the near future. FB4 allows lighting professionals to control lasers in complete harmony with other multimedia show elements, seamlessly integrating lasers into any show, installation, production, or event.

Most lasers on the market today utilize the older “ILDA” protocol for control. Where an “ILDA cable” (which is really a DB-25 male to female connection) is run from a control station to a laser projector. While the ILDA protocol has served the laser show industry well for many years, with the growth in popularity of multimedia show productions, the need for more advanced laser control has grown.

Pangolin’s new FB4 hardware is revolutionizing the industry in that regard, providing full network control of laser shows, without the need to use the outdated ILDA cable. And now designers can control lasers entirely from a lighting console (via ArtNet or DMX), from a PC (via a CAT5 cable), or in auto-mode, using FB4’s proprietary memory system. And all effects for the laser can easily be programmed in Pangolin software, and then saved to the FB4 hardware, inside the laser. Making it very simple to create complex laser shows, which can be controlled in a variety of different ways. FB4 hardware has also been used on a variety of tours and events, including the recent Metallica World Tour, TomorrowLand festival in Belgium, as well as the recent Pretty Lights performance at the Serpent Festival in Australia.

KVANT’s new line professional laser projectors also integrate Pangolin’s FB4 hardware, providing complete network control for any of their systems. And KVANT is leading the industry in that respect, being the first laser projector manufacturer to have systems with integrated FB4 control hardware available.

This is why KVANT lasers were chosen for the project, as K-Systems and their constituents at the Marriott demanded technology that would be self sufficient, and easily interface with other multimedia show elements.

In addition to lasers, high resolution video screens, G-Spot moving head lights from well known manufacturer SGM, and a series of haze machines from MDG surround the resort area, providing a nice backdrop to the powerful lasers, which entertain guests and clients from around the world.

Pangolin’s BEYOND software is being used to control nearly all aspects of the show, including the lasers, video and even some of the DMX lighting.

The BEYOND software is very powerful, and has a lot of options for compatibility with other media, including Timecode. Because of this, the team at K-Systems (led by Creative Designer Gabe Letourneau) were able to do things like take in LTC and OSC commands, and send things like midi triggers to other consoles (including the GrandMA) and equipment that could be added in the future.

In a recent interview, Letourneau notes… “In order to control as many elements as possible from one single point of access, we had BEYOND control the lasers, video, and audio, all on a single timeline.

This is really helpful if you need to make a quick change, or add or remove any elements. This also allows us to easily change and edit content on the fly, when the show needs to be customized. Given that the Marriott requested the ability to customize content quickly for various clients, events, or promotions they have taking place, we felt that BEYOND’s versatility made it an excellent control platform in that regard. Having everything in BEYOND also allows us to avoid any timecode delays or complications, and keeps everything on the exact same clock. Because all of the content on BEYOND’s timeline is within a few frames, nothing will ever be off. And we can organize different parts of the show’s timing very easily, just buy selecting all of the content in one area, and sliding it into place…

… All of this flows nicely as we have BEYOND controlling the GrandMA as well. The Pharos software oversees the day elements of the show (such as property lighting) and then triggers the LTC to start BEYOND, which is controlling the GrandMA. We also send audio to a Rane HAL, and a Control 4 video system. The setup works really well, and makes it very easy to make changes or customize content when required. And because of this, the installation can essentially run itself. “

The whole Marriott Light up the Night project further illustrates how lasers are being used as the centerpiece at a wide variety of events, installations and shows. As well as how new laser technology from companies like Pangolin and KVANT, are helping lasers more easily interface with other multimedia show elements, making it easier for designers to create, control and run synchronized large scale events.

Due to the success of the installation and it’s ability to generate revenue for the establishment, Marriott is already is already exploring the idea of installing this same concept at a variety of other hotel and property locations. And because of the high profile nature of the project, K-Systems has also received a variety of inquiries from other hotel and event establishments. The owner of K-Systems Mitchell Piper goes on to note… “We are extremely proud of the Marriott installation, and it’s notability for being one of the more technically sophisticated multimedia installations taking place at a hotel property. The install serves as a great model for future projects of this kind, and we at K-Systems are extremely excited to bring the concept to more establishments around the world.” 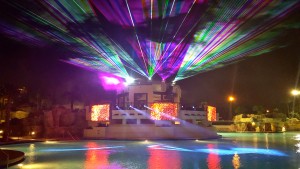 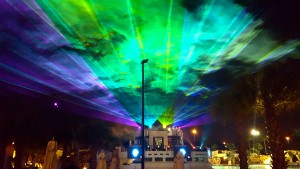 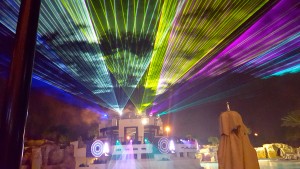 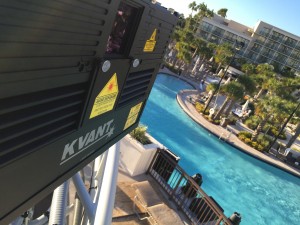 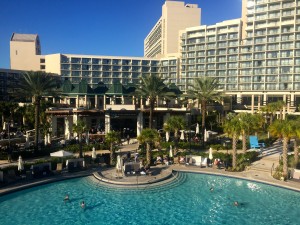 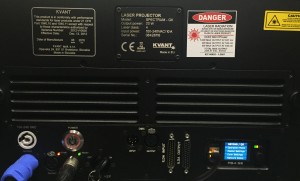